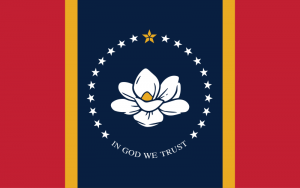 The committee to design a State Flag was appointed by legislative action February 7, 1894, and provided that the flag reported by the committee should become the official flag. The committee recommended for the flag “one with width two-thirds of its length; with the union square, in width two-thirds of the width of the flag; the ground of the union to be red and a broad blue saltier thereon, bordered with white and emblazoned with thirteen (13) mullets or five-pointed stars, corresponding with the number of the original States of the Union; the field to be divided into three bars of equal width, the upper one blue, the center one white, and the lower one extending the whole length of the flag.