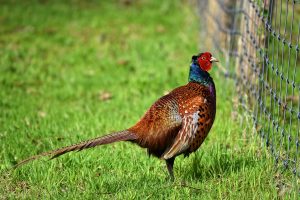 The Chinese ring-necked pheasant is the state bird. It was introduced to South Dakota in 1898 and is easily recognized by its colorful plumage. It is also known for its delicious meat.

Since it is primarily a Midwestern bird, pheasant is considered a delicacy in many other states.

The South Dakota state bird, the Ringed-necked Pheasant, is a bird thatwas imported to America from Asia, and therefore has no place in Audubon’sBirds of America, which is comprised exclusively of wild birds native toNorth America.