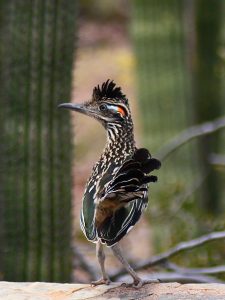 Officially adopted March 16, 1949. It was adopted under the name “Chaparral Bird”. In Spanish, it is called “El Correcaminos”.

The comical roadrunner prefers running to flying and has been clocked at speeds of 15 miles per hour. They are approximately 22 inches in length and their diet consists of insects, lizards, centipedes, mice and snakes.

The New Mexico state bird, the Roadrunner, was a bird not known to Audubonin his time, and was therefore not included in the 1840 edition of Birdsof America.