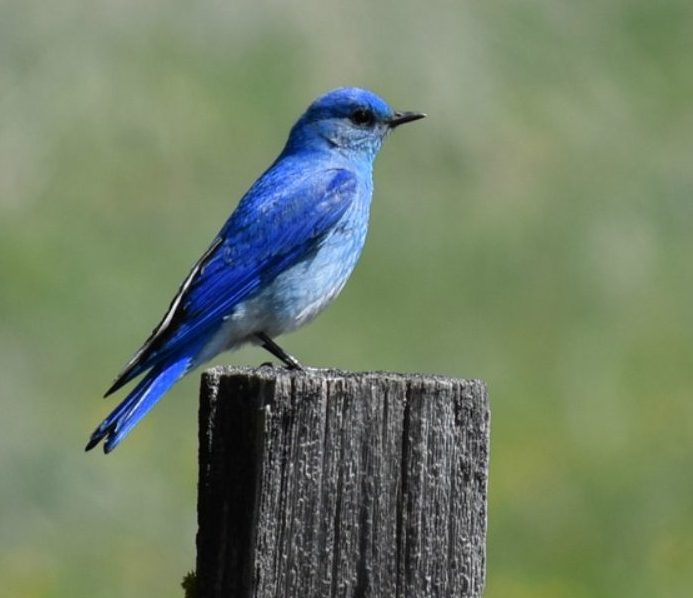 The Eastern Bluebird (Sialia sialis) was designated by the Office of the Secretary of the State on June 25, 2013 as the Missouri state bird. Interestingly, Missouri and New York share the same bird.

The Eastern Bluebird is found in rural open fields, meadows and large yards east of the Rocky mountains and they are prevalent in Missouri. They are bright blue on top and their chest and belly are brown and white.

Bluebirds eat a good amount of fruits as well as insects and seeds. They often nest in old woodpecker holes in dead pine or oak trees, up to 50 feet high from the ground. They can be aggressive during nesting season and can be seen attacking other birds and nests.

This lovely bird is found in all parts of our country, and is generallya permanent resident of the Southern States. It adds to the delight impartedby spring, and enlivens the dull days of winter. Full of innocent vivacity,warbling its ever pleasing notes, and familiar as any bird can be in itsnatural freedom, it is one of the most agreeable of our feathered favourites.The pure azure of its mantle, and the beautiful glow of its breast, renderit conspicuous, as it flits through the orchards and gardens, crosses thefields or meadows, or hops along by the road-side. Recollecting the littlebox made for it, as it sits on the roof of the house, the barn, or thefence-stake, it returns to it even during the winter, and its visits arealways welcomed by those who know it best.

When March returns, the male commences his courtship, manifesting asmuch tenderness and affection towards his chosen one, as the dove itself.Martins and House Wrens! be prepared to encounter his anger, or keep ata respectful distance. Even the wily cat he will torment with querulouschirpings, whenever he sees her in the path from which he wishes to pickup an insect for his mate.

The Blue-bird breeds in the Floridas as early as January, and pairsat Charleston in that month, in Pennsylvania about the middle of April,and in the State of Maine in June. It forms its nest in the box made expresslyfor the purpose, or in any convenient hole or cavity it can find, oftentaking possession of those abandoned by the Woodpecker. The eggs are fromfour to six, of a pale blue colour. Two and often three broods are raisedin the year. While the female sits on the second set of eggs, the maletakes charge of the first brood, and so on to the end.

The food of this species consists of coleoptera, caterpillars, spiders,and insects of various kinds, in procuring which it frequently alightsagainst the bark of trees. They are also fond of ripe fruits, such as figs,persimmons, and grapes, and during the autumnal months they pounce on grasshoppersfrom the tops of the great mullein, so frequent in the old fields. Theyare extremely fond of newly ploughed land, on which, especially duringwinter and early spring, they are often seen in search of the insects turnedout of their burrows by the plough.

The song of the Blue-bird is a soft agreeable warble, often repeatedduring the love-season, when it seldom sings without a gentle quiveringof the wings. When the period of migration arrives, its voice consistsmerely of a tender and plaintive note, perhaps denoting the reluctancewith which it contemplates the approach of winter. In November most ofthe individuals that have resided during the summer in the Northern andMiddle Districts, are seen high in the air moving southward along withtheir families, or alighting to seek for food and enjoy repose. But manyare seen in winter, whenever a few days of fine weather occur, so fondare they of their old haunts, and so easily can birds possessing powersof flight like theirs, move from one place to another. Their return takesplace early in February or March, when they appear in parties of eightor ten of both sexes. When they alight at this season, the joyous carolsof the males are heard from the tops of the early-blooming sassafras andmaple.

During winter, they are extremely abundant in all the Southern States,and more especially in the Floridas, where I found hundreds of them onall the plantations that I visited. The species becomes rare in Maine,still more so in Nova Scotia, and in Newfoundland and Labrador none wereseen by our exploring party.

My excellent and learned friend Dr. RICHARD HARLAN of Philadelphia,told me that one day, while in the neighbourhood of that city, sittingin the piazza of a friend’s house, he observed that a pair of Blue-birdshad taken possession of a hole cut out expressly for them in the end ofthe cornice above him. They had young, and were very solicitous for theirsafety, insomuch that it was no uncommon thing to see the male especially,fly at a person who happened to pass by. A hen with her brood in the yardcame within a few yards of the piazza. The wrath of the Blue-bird roseto such a pitch that, notwithstanding its great disparity of strength,it flew at the hen with violence, and continued to assail her, until shewas at length actually forced to retreat and seek refuge under a distantshrub, when the little fellow returned exultingly to his nest, and therecarolled his victory with great animation.

This species has often reminded me of the Robin Redbreast of Europe,to which it bears a considerable resemblance in form and habits. Like theBlue-bird the Redbreast has large eyes, in which the power of its passionsare at times seen to be expressed. Like it also, he alights on the lowerbranches of a tree, where, standing in the same position, he peeps sidewiseat the objects beneath and around, until spying a grub or an insect, helaunches lightly towards it, picks it up, and gazes around intent on discoveringmore, then takes a few hops with a downward inclination of the body, stops,erects himself, and should not another insect be near, returns to the branch,and tunes his throat anew. Perhaps it may have been on account of havingobserved something of this similarity of habits, that the first settlersin Massachusetts named our bird the Blue Robin, a name which it still retainsin that state.

I have not received any intimation of the occurrence of this interestingbird to the west of the Rocky Mountains, although it was observed by Mr.TOWNSEND on the head waters of the Missouri. Dr. RICHARDSON mentions itas being found in summer to the eastward of the Rocky Mountains, up tothe 48th parallel of latitude, beyond which none were seen by the membersof the expedition. I found it abundant and breeding in the Texas. The eggsmeasure seven and a half eighths of an inch in length, five-eighths andthree-fourths in breadth, and are rather more bulky than is usual in birdsof this family. In the United States, when in an uncultivated district,it forms its nest in the hollow or hole of a tree.

Bill and feet black, the soles yellow, iris yellowish-brown. The generalcolour of the upper parts is bright azure-blue, that of the lower yellowish-brown,the belly white. Shafts of the quills and tail-feathers dusky.

The female has the upper part of a tint approaching to leaden, the foreneckand sides yellowish-brown, but duller than in the male, the belly white.

When fully fledged, the young have the upper part of the head, the backof the neck, and a portion of the back broccoli-brown; the rest of theupper part much as in the female. The lower parts are light grey, the feathersof the breast and sides margined with brown.

In a male preserved in spirits, the roof of the mouth is flat, and similarto that of the Thrushes; the tongue triangular, deeply emarginate and papillateat the base, very thin, flat above, horny towards the end, tapering toa slit point, and having the edges lacerated. The oesophagus, is 2 1/2 inches long, its width at the upper part 4 twelfths;the proventriculus, large. The stomach, is of moderate size,broadly elliptical, a little compressed, 8 twelfths long, 7 twelfths broad;its muscles distinct, the lateral of considerable thickness, the lowervery thin, the tendons elliptical; the epithelium tough, dense, with longitudinalrugae. The intestine, [e f g h i], is rather short and wide, its lengthbeing 7 1/4 inches, its breadth in the duodenal portion 2 3/4 twelfths,contracting to 2 twelfths; the rectum of the same width at first, but enlarginginto an oblong cloaca, [i], 5 twelfths wide; the coeca, [h], 2 twelfthslong, 1/2 twelfth broad, cylindrical, 1 inch 1 twelfth distant from theextremity. Elongated salivary glands.

The trachea is 1 inch 10 twelfths long, moderately flattened, its rings65, firm, with 2 additional half rings. There are four pairs of inferiorlaryngeal muscles; the bronchi of about 15 half rings. THE GREAT MULLEIN.

This plant, which is well known in Europe, is equally so in America;but whether it has been accidentally or otherwise introduced into the lattercountry, I cannot say. At present there is hardly an old field or abandonedpiece of ground on the borders of the roads that is not overgrown withit. In the Middle and Southern Districts, it frequently attains a heightof five or six feet. The flowers are used in infusion for catarrhs, anda decoction of the leaves is employed in chronic rheumatism.

The Bluebird is also the New York State Bird.