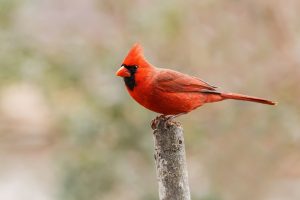 In richness of plumage, elegance of motion, and strength of song, thisspecies surpasses all its kindred in the United States. It is known bythe names of Red-bird, Virginia Nightingale, Cardinal-bird, and that atthe head of the present article. It is very abundant in all our SouthernStates, as well as in the peninsula of the Floridas. In the western countrya great number are found as far up on the Ohio as the city of Cincinnati,and they extend to considerable distances into Indiana, Illinois and Missouri.They are found in the maritime districts of Pennsylvania and New Jersey,where they breed, and where a few remain the whole year; some are alsoseen in the State of New York, and now and then a straggler proceeds intoMassachusetts; but farther eastward this species has never been observed.

This fine songster relishes the interior of the forest, and the heartof the deepest cane-brakes or retired swamps, as well as the neighbourhoodof cities. It is constantly found in our fields, orchards and gardens;nay, it often enters the very streets of our southern towns and villagesto breed; and it is rare that one goes into a planter’s yard without observingthe Red-bird skipping about the trees or on the turf beneath them. Go whereit may, it is always welcome, and every where a favourite, so rich is itssong, and so brilliant its plumage.

The Cardinal-bird breeds in the Floridas. In the beginning of MarchI found them already paired in that country, and on the 8th of Februarynear General HERNANDEZ’s. In the neighbourhood of Charleston, as well asin Louisiana, they are nearly a month later, and much the same lapse oftime takes place again before they form a nest in the State of New Jerseyor in that of Kentucky.

The nest is placed, apparently without much consideration, in some lowbriar, bush, or tree, often near the fence, the middle of a field, or theinterior of a thicket, not far from a cooling stream, to which they arefond of resorting, for the purpose of drinking and bathing. Sometimes youfind it placed close to the planter’s house or in his garden, a few yardsfrom that of the Mocking-bird or the Thrasher. It is composed of dry leavesand twigs, together with a large proportion of dry grass and slips of grape-vines,and is finished within with bent-grass, wrought in a circular form. Theeggs are from four to six, of a dull white colour, marked all over withtouches of olive-brown.

In the Southern Districts they now and then raise three broods in theseason, but in the Middle States seldom more than one. The young on leavingthe nest, frequently follow their parents on the ground for several days,after which they disperse and seek for food apart. During the pairing season,the males are so pugnacious, that although they breed near birds of otherspecies, they never allow one of their own to nestle in their vicinity.One male may be seen following another from bush to bush, emitting a shrillnote of anger, and diving towards the fugitive antagonist whenever an opportunityoffers, until the latter has escaped quite beyond his jurisdiction, whenthe conqueror, elated, returns to his grounds, ascends his favourite tree,and pours out his song in full exultation.

Those which migrate to the eastward begin to move about the commencementof March, usually in the company of the Towhe Bunting and other Sparrows,hopping and passing from bush to bash during the whole day, announcingto the traveller and husbandman the approach of a more genial season, andresting at night in the secluded swamps. The males precede the femalesabout ten days.

Towards autumn they frequently ascend to the tops of tall trees in searchof grapes and berries, being as fond of succulent or pulpy fruits as theyare of the seeds of corn and grasses. On the least appearance of dancerthey at once glide into the interior of the nearest thickets. During thesummer heats they frequently resort to sandy roads to dust themselves,carelessly suffering people to approach them until within a few yards,when they only remove to the nearest bushes, until the intruders pass.

They are easily raised when taken from the nest, and breed when keptin aviaries. My friend Dr. SAMUEL WILSON of Charleston, has had them breedingwith him, having placed straw-baskets for the purpose, in which the femaledeposited her eggs, without improving the nest any more than by placingin it a few grass-blades, perhaps pilfered from some of her neighbours.The purity of its colouring is soon lost when it is kept in confinement,where it is gentle, easily fed on corn or hemp-seed, and it sings whenplaced in a cage for several months in the year.

During winter the Cardinal Grosbeak frequently shews itself in the farm-yard,among Turtle-Doves, Jays, Mocking-birds, and various species of Sparrows,picking up its food from the store daily supplied to the poultry. It nowand then seeks refuge at night in the lee of some haystack, or throws itselfwith many other birds among the thickest branches of the nearest evergreentree.

The flight of the species is strong and rapid, although seldom continuedto any great distance. It is performed by glidings and jerks of the tail.When the bird is alighted it also frequently juts its tail with grace.Like all birds of the genus it hops, but does not walk.

Its song is at first loud and clear, resembling the finest sounds producedby the flageolet, and gradually descends into more marked and continuedcadences, until it dies away in the air around. During the love-seasonthe song is emitted with increased emphasis by this proud musician, who,as if aware of his powers, swells his throat, spreads his rosy tail, droopshis wings, and leans alternately to the right and left, as if on the eveof expiring with delight at the delicious sounds of his own voice. Againand again are those melodies repeated, the bird resting only at intervalsto breathe. They may be heard from long before the sun gilds the easternhorizon, to the period when the blazing orb pours down its noonday floodsof heat and light, driving the birds to the coverts, to seek repose forawhile. Nature again invigorated, the musician recommences his song, when,as if he had never strained his throat before, he makes the whole neighbourhoodresound, nor ceases until the shades of evening close around him. Day afterday the song of the Red-bird beguiles the weariness of his mate as sheassiduously warms her eggs; and at times she also assists with the modestyof her gentler sex. Few individuals of our own race refuse their homageof admiration to the sweet songster. How pleasing is it, when, by a cloudedsky, the woods are rendered so dark, that were it not for an occasionalglimpse of clearer light falling between the trees, you might imagine nightat hand, while you are yet fir distant from your home–how pleasing tohave your ear suddenly saluted by the well known notes of this favouritebird, assuring you of peace around, and of the full hour that still remainsfor you to pursue your walk in security! How often have I enjoyed thispleasure, and how often, in due humbleness of hope, do I trust that I mayenjoy it again!

This species is very abundant in Texas, where, as in our Southern States,it is a constant resident. Mr. TOWNSEND has observed it on the waters ofthe Upper Missouri. According to Dr. T. M. BREWER, it is but a chance visitorin Massachusetts during summer, indeed so rare, that he never knew certainlybut of one pair which bred in the Botanical Garden, Cambridge, about sixyears ago, and departed in the fill, with their young. The eggs measureone inch and half an eighth in length, five-eigths and a third in breadth,and are thus elongated, although the smaller end is well rounded.

Breeds abundantly from Texas to New York. Very rare in Massachusetts.Valleys of the Mississippi and Missouri, Kentucky and Ohio. Resident fromMaryland southward.

Bill short, very robust, conical, acute, deeper than broad at the base;upper mandible with its dorsal outline a little convex, the sides rounded,the edges sharp and inflected, the tip slightly declinate; lower mandiblebroader than the upper, with its dorsal line straight, the back broad,the sides rounded, the edges inflected; the gap-line deflected at the base.Nostrils basal, roundish, concealed by the feathers. Head large, neck short,body robust. Legs of moderate length, rather strong; tarsus compressed,anteriorly covered with a few scutella, posteriorly sharp; toes scutellateabove, free, the lateral ones nearly equal; claws slender, arched, compressed,acute, that of the hind toe considerably larger.

Plumage soft and blended, slightly glossed. Wings of moderate length,broad, much rounded, the fourth quill longest; primaries rather broad,rounded, from the second to the sixth slightly cut out on the outer web,secondaries rather narrow and rounded. Tail long, straight, rounded. Feathersof the crown long, pointed, and erectile.

Bill of a tint approaching to coral-red. Iris dark hazel. Feet paleumber. The whole upper parts of a deep dusky-red, excepting the head, whichis vermilion. The anterior part of the forehead, the lores, and the upperanterior part of the neck, black. The under parts are vermilion, whichis brightest anteriorly. Inner webs of the quills light brown, their shaftsand those of the tail-feathers blackish-brown.

The female has a crest as well as the male, which it resembles in thetexture of its plumage, but the tail is proportionally shorter. The generalcolour of the upper parts is dull greyish-brown, slightly tinged with olive;the longer crest-feathers are streaked with dull red, the wings, coverts,and outer edges of the quills, are of the same tint; the edge of the wingsand the lower coverts are pale vermilion, and the inner edges of the quillsare of the same tint, but paler. The parts surrounding the base of thebill, which are black in the male, are blackish-grey, and the lower partsin general are pale greyish-brown.

In a male preserved in spirits, the palate ascends very abruptly, andhas two very elevated soft ridges, at the junction of which anteriorlyis a prominent soft space, on the lower mandible beneath are three longitudinalridges with four grooves, of which the two lateral are much wider. Thetongue is 4 1/2 twelfths long, emarginate and papillate at the base, convexand fleshy above, as high as broad, horny beneath, tapering to a point.The width of the mouth is 6 twelfths. The lower mandible is broader thanthe upper, exceedingly strong, and very deeply concave. The oesophagusis 2 inches 5 twelfths in length, 3 twelfths in width. The stomach prettylarge, roundish, 7 1/2 twelfths long, 7 twelfths broad; its lateral musclesstrong, the tendons large, the epithelium very dense, longitudinally rugous,brownish-red. The stomach is filled with seeds, which have all been husked.Intestine 10 1/4 inches long, its width from 3 twelfths to 2 twelfths.Coeca 3 twelfths long, 1/2 twelfth broad, 1 inch distant from the extremity.Cloaca ovate, 4 twelfths in width.

Trachea 1 inch 10 twelfths long, from 1 1/4 twelfths to 1/2 twelfthin breadth; its rings 52; the muscles as in the other species. Bronchialhalf rings about 12.