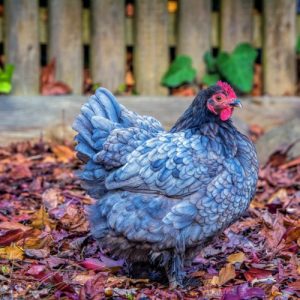 The Delaware state bird, the Blue Hen Chicken, is a domestic bird (chicken)and therefore has no place in Audubon’s Birds of America, which is comprisedexclusively of wild birds native to North America.

Adopted as the official state bird on April 14, 1939, the Blue Hen Chicken had long been used as a motif in numerous political campaigns and in many publications.

During the Revolutionary War, the men of Captain Jonathan Caldwell’s company, recruited in Kent County, took with them game chickens that were said to be of the brood of a famous Blue Hen and were noted for their fighting ability.

When not fighting the enemy, the officers and men pitted their Blue Hen chickens in cockfights, an activity that is now illegal in all 50 United States and is a felony in 33 states and the District of Columbia. The fame of these cockfights spread throughout the army and when in battle, the Delaware men fought so valiantly that they were compared to these fighting cocks.