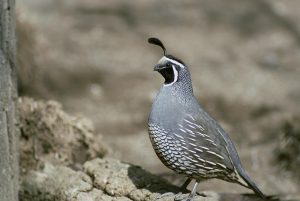 The California quail (Lophortyx californica), also known as the valley quail, became the official state bird in 1931. A widely distributed and prized game bird, it is known for its hardiness and adaptability. Plump, gray-colored and smaller than a pigeon, the California quail sports a downward curving black plume on top of its head and black bib with white stripe under the beak. Flocks number from a few to 60 or more in the fall and winter months, but in the spring break into pairs. They nest in hollows scratched in the ground and concealed by foliage, and their eggs, 6 to 28 in number, are creamy white and thickly spotted with golden brown.

This beautiful species was discovered in the course of the voyage of LA PEROUSE, and figured in the atlas accompanying the account of that unfortunate expedition, but without any other notice respecting its habits or distribution, than an intimation of its having been found abundant in the plains and thickets of California, where it formed large flocks. MR. TOWNSEND has lately sent me a beautiful specimen of the male, which he procured on the 6th of March, 1837, near Santa Barbara in California. I have to regret, however, that he has not furnished me with any account of its habits. MR. NUTTALL, in speaking to me of this bird, informed me that it is very gentle or confident, so as to be in a great measure regardless of the approach of man, that its manners resemble those of our Common or Virginian Partridge, and that the males in spring are seen perched on low bushes, where they utter their love-notes in the same emphatic manner as the species just mentioned.

Bill very short, stout; its dorsal outline decurved from the base, the ridge narrow, the sides sloping and slightly convex, the edges sharp and overlapping, the tip rather obtuse but thin-edged; nostrils basal, oblong, opereulate in the fore part of the wide nasal groove, which is partially covered with feathers; gap-line a little arched; lower mandible with the angle short and rounded, the dorsal line ascending and slightly convex, the ridge broad, the sides convex, the edges sharp, the tip obtuse.

Head of moderate size, ovate; neck short; body full. Feet of moderate length, stout; tibia covered to the joint; tarsus rather short, a little compressed, sharp-edged behind, covered all round with angular scales, of which the anterior are very large; toes four, the first small, and placed higher than the rest; the anterior long, rather slender, the fourth considerably longer than the second, the third much the longest, all scutellate above. Claws long, rather slender, arched, rather obtuse.

Plumage full, firm, blended. Feathers on the fore part of the head linear, recurved, stiff; those of the neck oblong, of the throat blended, of the other parts generally broadly ovate. On the top of the head is an elegant crest of elongated feathers, six in number, at first decurved, towards the end recurved, narrow at the base, broad towards the end, with the webs deflected, the longest an inch and two-twelfths. Wings short, convex, much rounded, the fourth and fifth quills longest, the first eight-twelfths of an inch shorter. Tail rather short, much rounded, of twelve feathers.

Bill bluish-black. Iris dark hazel. Feet dull yellowish-grey, claws dusky. The stiff feathers on the forehead are dull yellow; the crest black, the upper part of the head dark-brown, margined with a band of white; the throat deep black, margined by a semilunar band of white, curving up to the eyes, behind which is a bare space. The hind part and sides of the neck are light ash-grey, anteriorly approaching to white, beautifully marked with black, each feather having a marginal band and central line of that colour; the lower half of the neck anteriorly and a part of the breast, are greyish-blue, the rest of the breast reddish-white, its central part chestnut-red, with semilunar black bands; the sides reddish-brown, each feather with a central white streak; the rest of the lower parts light yellowish-brown, faintly barred with dusky, the lower tail-coverts with a central dark brown streak. The back and wings are greyish-brown, the outer secondaries margined externally, the inner internally, with light red; the tail brownish-grey.

The female, which is a little smaller, has also a shorter tuft of elongated feathers on the head, and is much less brightly coloured; the bill being brown, the feet yellowish-brown; the upper part of the head dull reddish-brown, the throat and cheeks brownish-white, streaked with dusky; the hind part and sides of the neck greyish-brown, each feather with a median and marginal band of black, as in the male, but fainter; the lower part of the neck and part of the breast brownish-grey, the rest of the upper and lower parts as in the male, but much duller.