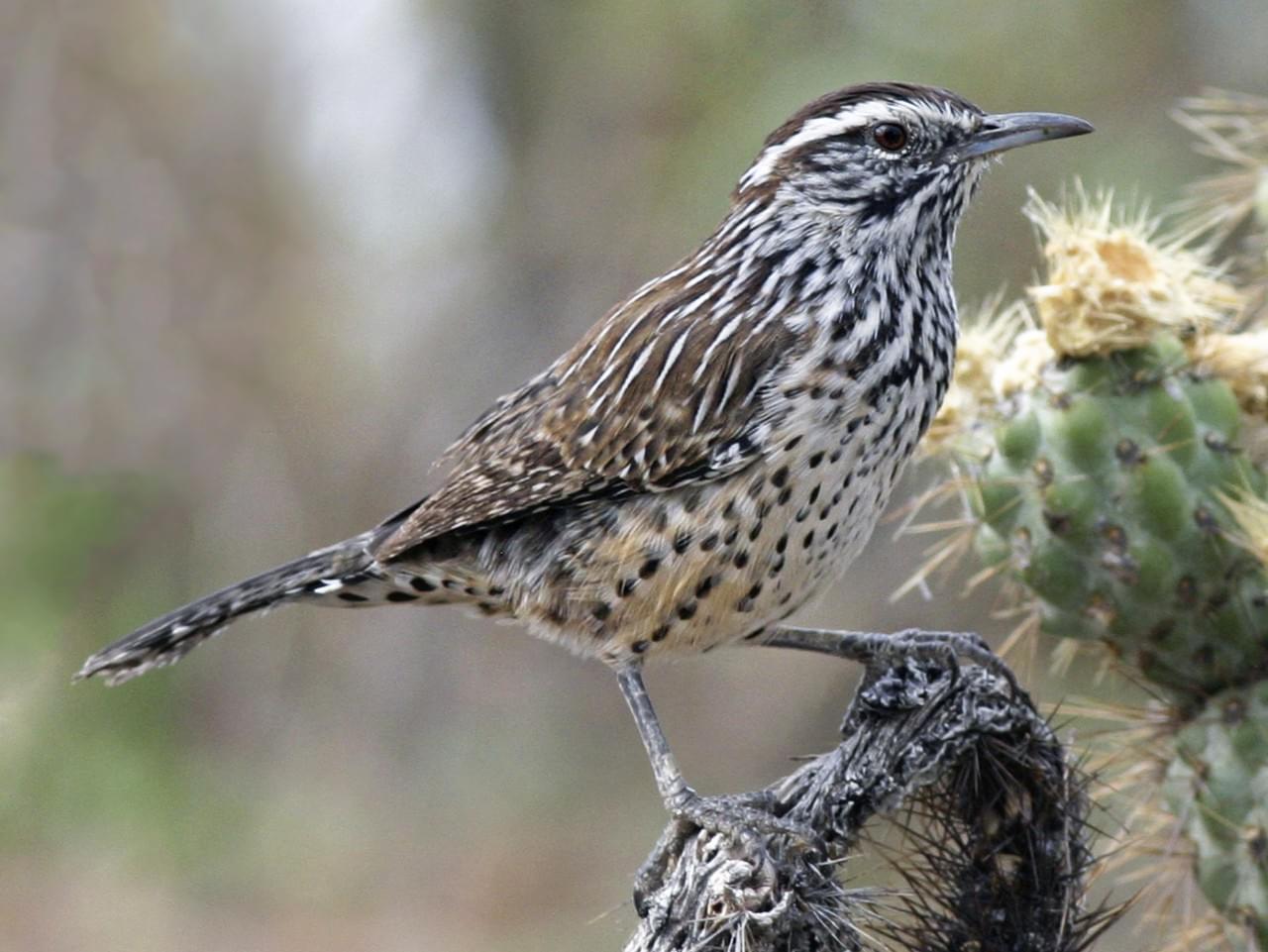 Although there is some belief that the cactus wren became the state bird of Arizona in 1973, it was actually adopted in 1931, 19 years after Arizona became a state. There are a few stories surrounding this debate, but according to the 1932 edition of Nature Magazine and the 1931 edition of Arizona Wildlife, a campaign was launched in 1931 to decide on the state bird. This was because the General Federation of Women’s Clubs wanted to have a state bird designated before their Biennial Council in Phoenix that year. This outgoing and attention grabbing bird won hands down.

APPEARANCE: The cactus wren is the largest wren in the United States, standing anywhere from 7 and 9 inches tall. It’s easy to spot with its white, brown and black-barred tail and wings, white eye stripe on a brown head, brown and black spotted belly and its slightly curved bill. Their wingspan is between 8 and 12 inches and they weigh a little over 1 pound. There is not a major difference in appearance between males and females. However, the young birds have a duller appearance overall and the top of their heads appear darker.

HABITAT: Found only in the Southwest and Mexico, the cactus wren prefers desert areas. Their nests – resembling a football in size and shape- have a tunnel-like entrance and are built in cactus plants, such as the massive saguaro. Their nests are made of coarse grass, feathers, plant fibers and even pieces of fabric they might find.

The male wren stays busy building 1 or 2 more nests during the breeding season. These alternate nests can be used as decoys to keep predators such as whip-snakes away from the real nest, but they are also used as roosting places throughout the year.  Sometimes a second or third clutch of eggs will be laid in these nests. Their pinkish colored eggs are covered with reddish brown spots and take about 16 days to hatch.

DIET: The diet of the Cactus Wren is much the same year round – insects such as ants, grasshoppers, and beetles. Occasionally they will eat small frogs and other reptiles, fruit, and seeds. They almost never drink water but get all the water they need from the insects they eat.

INTERESTING FACTS: The cactus wren is very protective of its nesting area. They have been known to attack squirrels, other birds, and even people who have gotten too close to their nests. They are not as shy as other wrens and, in fact, have been known to fly into open windows of cars or homes out of curiosity.

The Arizona state bird, the Cactus Wren, was a bird not known to Audubon in his time, and was therefore not included in the 1840 edition of Birds of America.